Overcoming obesity can lead to
depression, panic or rage


From Chapter 9 of LOST CONNECTIONS by Johann Hari:
“...What if these severely overweight people simply stopped eating, and lived off the fat stores they'd built up in their bodies until they were down to a normal weight? What would happen? ... what if you give people supplements for that, too? [Optifast 70 five times per day]
.....
And as the months passed, Vincent noticed something. It worked. The patients were shedding weight. 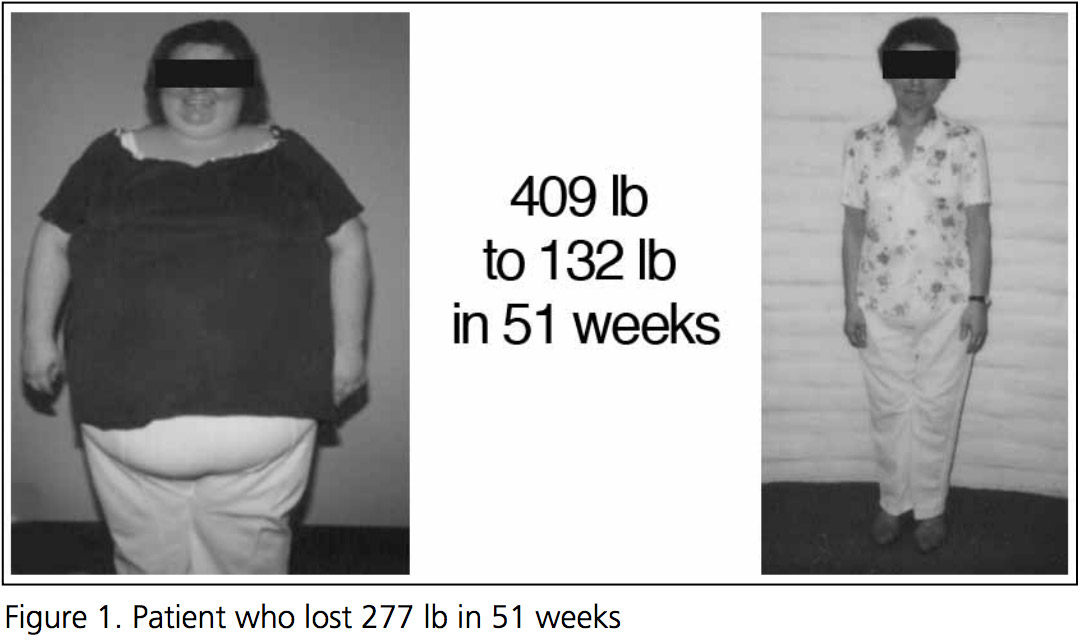 They were not getting sick - in fact, they were returning to health. People who had been rendered disabled by constant eating started to see their bodies transform in front of them. Their friends and relatives applauded. People who knew them were amazed. Vincent believed he might have found the solution to extreme overweight. "I thought - my god, we've got this problem licked," he said. And then something happened that Vincent never expected.

In the program, there were some stars - people who shed remarkable amounts of weight, remarkably quickly. The medical team - and all their friends - expected these people who had been restored to health to react with joy. Except they didn't react that way. The people who did best, and lost the most weight, were often thrown into a brutal depression, or panic, or rage. Some of them became suicidal. Without their bulk, they felt they couldn't cope. They felt unbelievably vulnerable. They often fled the program, gorged on fast food, and put their weight back on very fast.

...55 percent of the patients in the program had been sexually abused - far more than people in the wider population. And even more, including most of the men, had had severely traumatic childhoods. Many of these women had been making themselves obese for an unconscious reason: to protect themselves from the attention of men, who they believed would hurt them.

...there were two prison guards, who lost between 100 and 150 pounds each. Suddenly, as they shed their bulk, they felt much more vulnerable among the prisoners - they could be more easily beaten up. To walk through those cell blocks with confidence, they explained, they needed to be the size of a refrigerator.

...And the third category was that it reduced people's expectations of them. "You apply for a job weighing four hundred pounds, people assume you're stupid, lazy," Vincent said. If you've been badly hurt by the world - and sexual abuse is not the only way this can happen - you often want to retreat. Putting on a lot of weight is - paradoxically - a way of becoming invisible to a lot of humanity.

..."thank God that fire departments understand that the piece that you treat is the piece you don’t see - the flames inside, not the smoke billowing out." ...Obesity, he realized, isn’t the fire. It’s the smoke.”
See also: Journal article